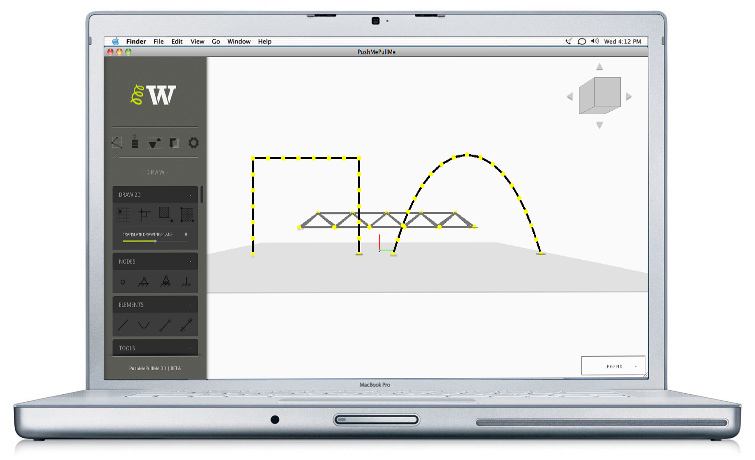 Push Me Pull Me is the name for a family of simulators designed to help undergraduate civil engineers develop a tacit understanding of structural behaviour. While many students study at length the formulae which govern structural behaviour, it is a common complaint among employers that the graduating engineers don’t have a sense of how common structures ought to behave.

Push Me Pull Me takes the maths out of understanding structural behaviour by providing students with onscreen models that they can push and pull using their mouse pointer. As they push the structure on the screen, it reacts in real time. Students also have the possibility of viewing the bending moment, shear and reaction diagrams for the models they are manipulating.

The development of Push Me Pull Me has been led by Expedition Engineering’s Gennaro Sennatore. The journey began with the creation of the initial Push Me Pull Me suite, tools that allows students to push and pull pre-drawn structures using their mouse pointer. These Push Me Pull Me models were based on parametric models, which were pre-calculated.

Following the success of Push Me Pull Me, Gennaro and his team set about building a real-time physics engine that would allow users to build and manipulate simple pinned truss-based structures. The outcome of this work was the game Catastrophe, in which players can push, pull and remove elements from famous structures until they collapse. Catastrophe featured a ‘sandbox’ mode in which users build and test their own structures, a feature which has been very popular with students and lecturers.

With Push Me Pull Me 3D Gennaro et al developed a fully 3D real-time physics engine that allowed the construction of structures with flexural elements and fixed connections. Users were also able to import geometries for structures from other CAD software, and to export their creations.

Link to Push Me Pull Me