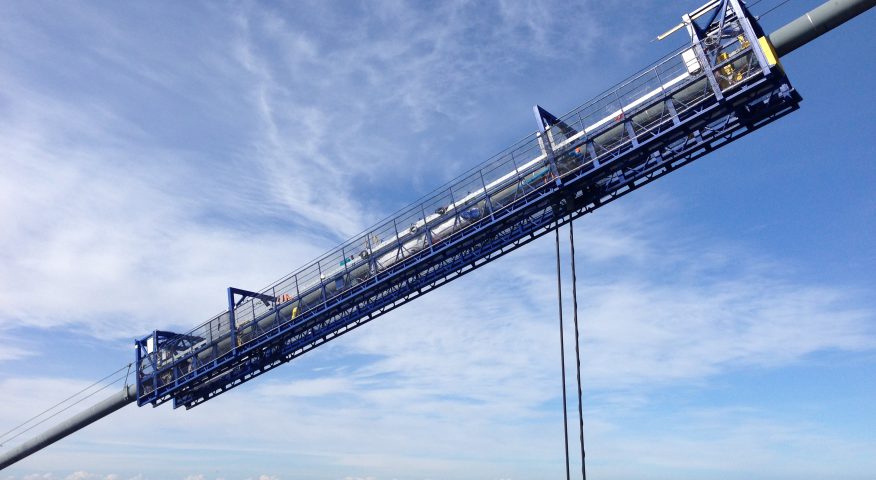 Nick Francis is an engineer with Eadon Consulting, a firm of engineers that specialise in making structures move. As part of Think Up’s Royal Academy of Engineering-funded research into the design strategies of engineers from different sectors of industry, I interviewed Nick about the conceptual design of structures that move. It turns out to be a fascinating interface between civil, mechanical electrical and control engineering.

What are they designing?

The following are all examples of structures that move:

In response to what need?

Designers of moving structures are usually designing in response to one of the following three needs: making a connection at the interface of different systems; enabling a change of use of space; or, giving people or equipment temporary access to a remote location.

An example of the first need is the creation of link bridge between a ferry and the terminal. A retractable stadium roof is an example of a structure that enables change of use of space. The gantries that hang underneath suspension bridges are examples of a moveable structures that allow people access to the underside of the bridge deck.

The design of moving structures can involve multidisciplinary design teams, but the engineers whose job it is to work out how to make the structure move are designing in response to a particular need: the need to safely and reliably move very large loads.

What key information does the brief give you?

The following is the key information that a designer of a moving structure needs from the brief:

Interestingly, cost is not a great concern at the briefing stage. Most of this key information is provided in an ‘approval in principle’ document, or AIP.

What is usually missing from a brief that you need to go and find out?

In the design of moving structures, innovation is taking something that works in one setting and applying it another. A designer is very unlikely to come up with a mechanical process that has never been done before.

When developing a solution, what comes first?

The first thing to think about is component sizing. This is akin to using span-to-depth ratios to do the initial sizing of beams in a building. Component sizing will tell you if the space allowed for the mechanism is realistic. According to Francis, ‘if you get that wrong at the concept stage you are always fighting it.’

Are there a set of go-to answers to consider first?

There are some system typologies that the designer will choose from early on in the design. For instance, what type of motion is needed, linear or circular? What is the power system, electric or hydraulic?

One set of go-to answers is the company’s back catalogue. ‘If we’ve done something similar we would try to do to those first’.

Can you characterise the dominant uncertainty?

The dominant uncertainty is the unknown in the design process that is likely to have the greatest impact on how the rest of the design turns out.

What tends to inspire the ideas you conceive of?

What models do you use to test an idea?

The common modelling tools that are used are:

What models you use for communicating ideas with others?

‘3D CAD models are usually enough to communicate the ideas that we develop with others in the design team, as long as everyone can import each others’ data.’ But according to Francis, one of the trickiest things to communicate with each other in a design team is different loading scenarios. There are often many permutations of loading scenarios which need to be understood and shared by the design team, and often the only way to do this is in a large table.

What are the most important tests that tend to determine whether or not an idea meets the brief?

According to Francis there are two really important tests for the viability of an idea. The first is meshing: making sure that the mechanical equipment fits in the space allowed, and checking that the structure itself is free to move.

The second is checking if the maintenance schedule is realistic. As Francis explains, moving structures that go wrong later in their lives tend to do so because of poor maintenance or poor design for maintenance.

When are bad decisions made in the design of moving structures?

In Francis’s opinion, bad decisions tend to be made in the design of moving structures when the designer works in isolation and doesn’t think about the wider reasons for what they are designing for – and also when designers try to be too clever.

To what extent are key decisions codified?

There is no one set of design codes that govern the design of moving structures and so what designers need to do is find the relevant parts of different codes that will allow them to validate that aspect of what they are doing. Francis describes it as a ‘hunt for validation’ as there is rarely a relevant code.

What are the consequences of making a bad decision in your domain of design?

Bad decisions at concept stage can often kill a project before it really gets going, spiralling costs, or client loss of confidence in the reliability of the proposed solution will make them turn to alternative lower risk (but often more expensive) solutions.

Bad decisions in detailed design will usually lead to structures which are expensive and difficult to commission, and then have ongoing problems during operation. In extreme cases this can lead to financial ruin of the consultant or contractor responsible, a requirement to completely re-start work, or early demolition of an un-reliable structures.

If safety is compromised then there is clearly a very severe risk to life. However, a robust approach to conducting independent checking of all moving large moving structures (such as gantries, opening bridges and ro-ro ramps) does a lot to ensure that safety risks are identified and mitigated.

When carrying out a design in your sector of engineering, what are first the three to five steps you would take?