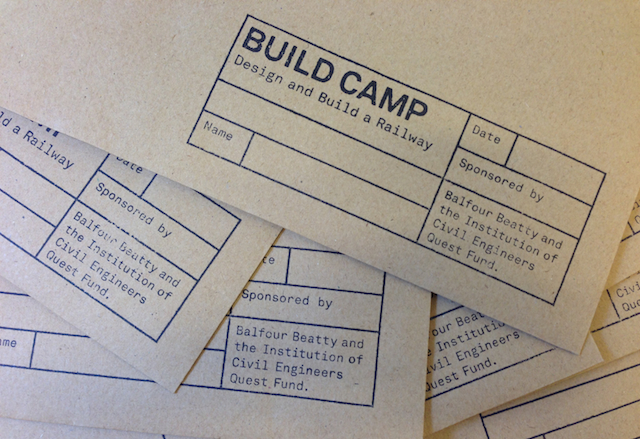 Build Camp, a collaboration between Think Up and Constructionarium, gives 16 to 18-year-olds a snapshot of the world of civil engineering enabled. Over four days on site, students: survey the route; design the railway, cuttings and embankments; plan and carry out the construction of the line; assemble and lift into position a bridge; ride a train along the route on opening day.

In the early days of Think Up we identified the need for an intensive hands-on activity that would inspire school-leavers to study civil engineering. And what better way to get an introduction that industry than to build a railway? Planning and constructing a railway involves all the main disciplines of civil engineering, and comes with the bonus of being able to ride it when it’s finished.

Constructionarium, ICE, CITB and Balfour Beatty bought into the idea and in Easter 2014 Constructionarium and Think Up piloted the first ever Build Camp. Over four days of students on site a group of Arwright scholars and UTC students planned, built and rode a scale version of a railway using real construction materials, processes and plant.

Think Up’s role in the development of Build Camp was to develop the initial concept and business plan, and to find a group of stakeholders to invest in and develop the pilot. Once funding was found, Think Up developed the learning approach for the event and worked with Constructionarium to design the on-sight activities. An important part of the design was the creation of a strong visual identity, which helps to communicate the key messages of the event. This visual identity then informed the design of the resource pack given to students and how the Constructionarium site was dressed to host this new kind of event. The pilot event was co-facilitated by Think Up and Constructionarium.

Following the success of the pilot we are now working to build an industry consortium to help support the long-term operation of Build Camp. For more information visit the Build Camp page on this website.